RÉPUBLIQUE JOSEPH: a meeting with the young designer

This is not a social media profile description but the details given to us, by the mastermind behind ‘République Joseph’, very matter-of-factly in the ‘What’s Up’ corner of the first Who’s Next of 2020. Launched in the depths of winter, in January 2018, this young brand truly stands out, thanks to the precision of its clean lines, alongside its thoughtful and original details for masculine, contemporary, and offbeat silhouettes.

The ready-to-wear brand began by producing collections every season. However, the relentless pace of design led them instead to opt for smaller capsule collections throughout the year. With each capsule collection, Joseph highlights the importance of persistence and never skipping steps. His stylist mother, who today also makes jewellery, is the source of his inspiration. She assembles pieces of old Francs into sparkling ornaments; bracelets, necklaces, rings – some of which twinkle around her son’s wrists today. From these Francs stamped with the French motto, ‘Liberté, Egalité, Fraternité’, the designer transforms the words into, ‘Liberté, Créativité, Fraternité’. This is an idea which borrows from her pieces, similarly to the silky lining of his jackets which are decorated with Marianne’s profile, or the black cotton jersey turtleneck which has the word ‘RÉPUBLIQUE’, printed in red and orange capital letters on its neck.

Very conceptual work. Every piece is the result of an aesthetic manufacturing which can involve meticulously making yokes, topstitching, and cut-outs.

The lines are reminiscent of Moroccan architecture, but also of cardboard postal parcels, with their clever cuts and folds which enable them to fit together perfectly. The young talent is inspired by beautiful materials from across the Channel, such as tartans from London and mesh from Scotland, which he reworked for his capsule collection showcased at Who’s Next. Certain pieces stand out as ‘key products’, notably the Baccara jacket in a blue and green tartan, with white top-stitching which never crosses. There are also the Alone trousers which have a samurai-inspired cut and no visible seams, therefore keeping the fabric pattern intact. And finally, the ‘Republique of’ hoodie, with the designer’s dream republics listed all the way down the sleeve; ‘Republique of liberty’, ‘Republique of respect’, ‘Republique of joy’. Many other messages of love and hope are also embroidered onto this iconic piece of streetwear. Throughout the collection, meticulous embroidery work is favoured over printing or flocking. 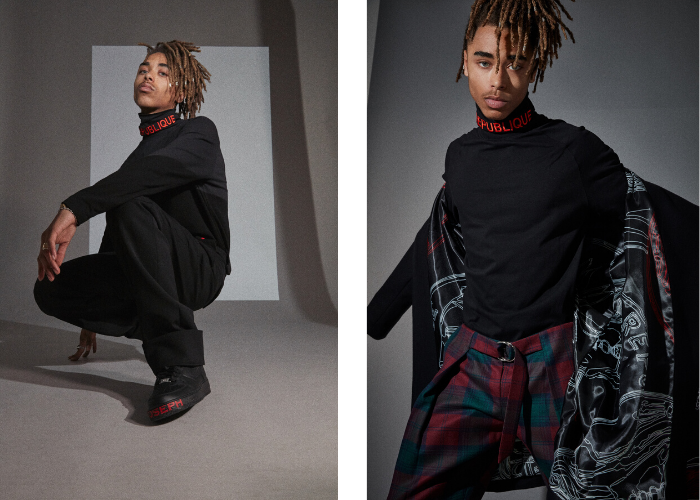 Positioned amongst the young designers in the What’s Up area of the latest Who’s Next 2020 edition, Joseph and his team take advantage of this perfect opportunity to forge bonds and make themselves known, thanks to the meetings which define these four days. Being a part of this group of emerging brands enables them to recount their paths, as well as obstacles to overcome, all the while showcasing their pieces to buyers and analysing their reactions. “I think that my best meeting at Who’s Next has been them,” continues Joseph before mentioning the two other young brands also in the What’s up area. “We have grown up together over these past four days through sharing ideas and exchanging viewpoints. As we all come from different backgrounds, we have been also able to discuss different forms of production. This is valuable to us all.”

For République Joseph, although it is only just beginning, the real challenge of this year is find other concept stores over the next six months, in order to improve and expand their business in France. They currently have two French retailers; one in the south of France and one in Paris. Expansion of the communication branch of which the site is a part, and the end-of-year competitions, are also in the sights of the young designer, who often expresses himself with his hands. “A young brand must take their time and avoid rushing. Both by analysing feedback and also by studying the competition,” concludes the designer. It is his slowness that sets him apart in the midst of the frenzied creativity of the fashion industry.