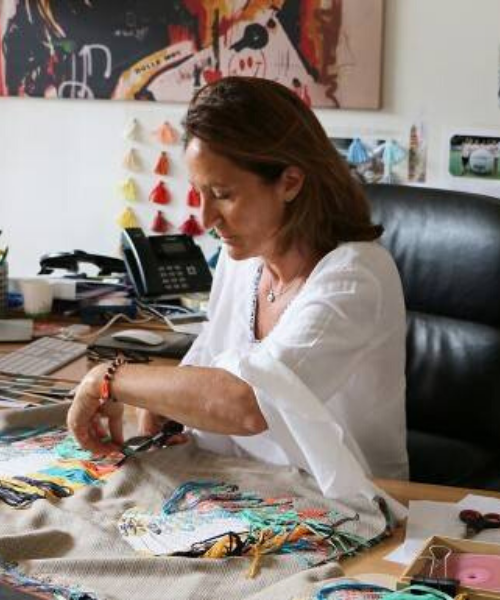 Internationally inspired. Well established in the accessories industry, Storiatipic and its 13 years worth of collections reflect the career of brand founder, Marie Gozard. Born into a French and Italian family, her European roots gave her a passion for travel and discovering new cultures and horizons, until she arrived in India, which has been her home for the past few years. The brand, which highlights its founder’s journeys and experiences, has become an accessories giant in France, known primarily for its scarves. Storiatipic can now be found in over 400 French retail outlets, and around 350 internationally. Each collection and model has its own story to tell. The pieces boast a mix of patterns and figurative designs, combining fine materials with complex weaving patterns, resulting in a thoughtful and colourful blend. The founder’s attraction towards different cultures and their unique know-how for textiles is evident in her work; both in the brand’s signature scarves, but also in its other accessories, and throughout its ready-to-wear collections. Marie Gozard constantly reinvents herself by marrying ancestral savoir-faire with the latest trends.

Colourful, embellished, lively… The designs come from the sources of inspiration which Gozard gathers during her travels, always guided by her instinctive curiosity. Each year, a new whim fascinates the creator, manifesting itself in her collection patterns and themes. Since the very beginning, the brand has been thought of as international, reflecting Marie herself. “In order to see where you’re going, you have to know where you came from.” The designer draws inspiration both from everyday life, and from traditions – this is how she creates perennial objects, which are also in line with today’s tastes. The Storiatipic teams regularly travel to India – not for the country’s low labour and production costs, but for its ancestral textile techniques which animate their collections, being adapted for modern pieces to suit Western tastes. Their emblematic scarves, for example, are woven out of fine materials, such as a wool/silk mix, which is thick to the touch yet retains its suppleness thanks to a special weave. The brand’s signature pieces are these colourful scarves, with their eye-catching patterns which epitomise its DNA, and their hand embroidery which boosts sales. These motifs can also be found on the bags and ready-to-wear pieces. Each pattern is designed from scratch and renewed each season, thus creating a unity between lines.

A strong believer in trade shows, Marie Gozard has been visiting them since starting her brand. Who’s Next is an unmissable event in her calendar, since it is in line with the production seasons thanks to its editions in September and January. A special trade show for Storiatipic: “In our opinion, it’s the ready-to-wear leader, particularly since it allows us to take direct orders.” More than just a biannual meeting point, it is when the brand reveals their campaign visuals and officially launches their upcoming collections. Although the label faces many challenges, its main struggle is making sure that it continues to surprise clients season after season, retaining their loyalty whilst still coming up with new designs. Another aim is to develop the turnover of their ready-to-wear selection, which they first launched 4 seasons ago, in order to find a balance between summer and winter sales. Their leading product – the scarf – is the star of the colder seasons, so working on the ready-to-wear range will help to even this out. 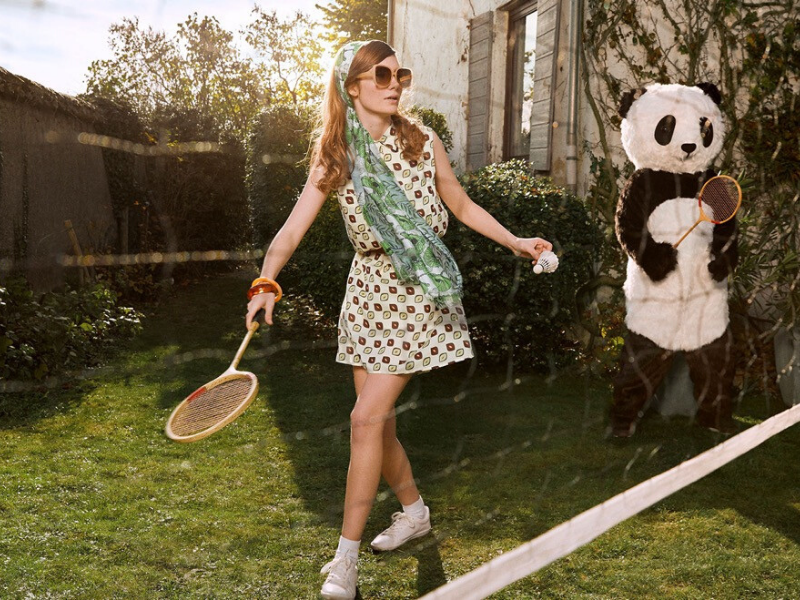 A green future. The brand is carving out an immediate future of commitment to socially and environmentally conscious production. The main challenge is being able to establish the traceability of products. The ‘Programme Colibri’, launched by the brand, is named after the natural act of hummingbirds carrying small droplets of water, contributing towards the extinguishing of forest fires. Through commitment, this is what the brand hopes to evoke on its own scale, to extinguish the fire which is the extremely polluting phenomenon of mass production. The brand keeps a close eye on its production, with its selection of partners known to be particularly meticulous in terms of colouration, the treatment of water used, and the dying of materials. The social aspect is also studied, and suppliers are required to bring themselves up to a certain standard within a time frame of two years in order to meet the criterion for certification. The second issue resides in the treatment of products once they have been sold: meaning the recycling of materials – a long term project. For the Marie Gozard brand, one of the biggest obstacles in daily life is to explain why they travel to India: for the know-how and wonderful materials – not for the low prices! Moreover, this is a question of educating the consumer on the production chain and the cost of quality products in order to end the collective obsession with the ‘Made in France’ label.

With 13 years of experience behind her, the founder advises young brands to ensure that they have a truly original concept, in order to differentiate themselves from what’s already on the market. Also, to surround themselves with key industry players and go to trade shows – these are real hubs of opportunity which can provide diverse means of support for both the communications and commercial aspects, enabling you to envisage yourself in the future, and anticipate your needs. The name ‘Storiatipic’ effectively evokes the correlation between the art of storytelling, which encapsulates the brand, and its trump card for individuality: the atypical. Their experience at Who’s Next 2020 has not only been rich in meetings and diverse and promising exchanges, but it has also been beneficial by allowing Storiatipic to share knowledge and support with young brands, to whom the team – almost a family – give their advice, following their journeys. The future for Storiatipic will be marked by environmental awareness: their brand new site will feature an outlet section in order to reduce waste and carbon footprint.